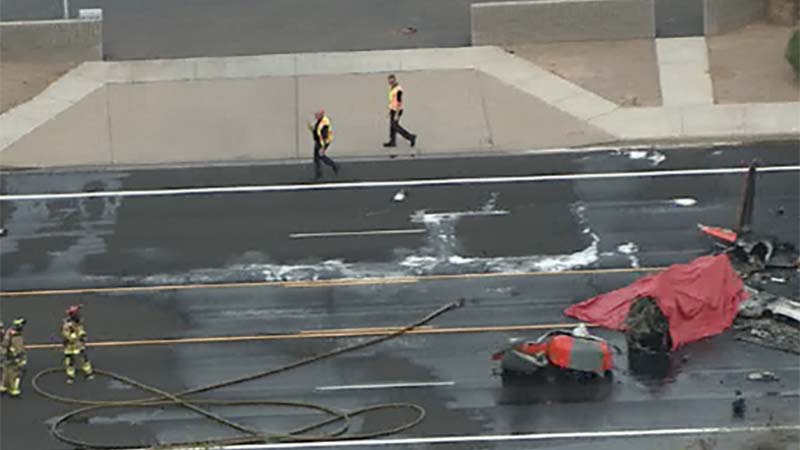 Mesa, Arizona—A small plane crashed on takeoff near Falcon Field in Mesa on Tuesday, claiming the lives of pilot Jesse R. Goodwin, age 43 of Gilbert, and Ataberk Besler, age 18.  Mr. Goodwin was a commercial pilot with American Airlines.  Mr. Besler was a foreign exchange student from Canakkale, Turkey in the AFS-USA program at Washington High School.

The plane crashed and burst into flames in the middle of Greenfield Road between McDowell and McKellips Roads.  It fell directly in front of Melissa Michael and her children, as they drove home on Greenfield Road.  “I just started reversing.” she said.  “I didn’t know if we were going to make it.”  Crews from Mesa Fire and Medical station responded.

The single-engine AT-6 is a small World War II-era plane used in training because of its durability and reliability.  Dick Stich, a retired U.S. Air Force pilot and member of the Falcon Warbirds, stated accidents involving these planes are very rare.

Accident investigators with the Federal Aviation Administration and the National Transportation Safety Board have not yet determined the cause of the crash.

We extend our condolences to the families and friends of Mr. Goodwin and Mr. Besler at this time of great loss for them.