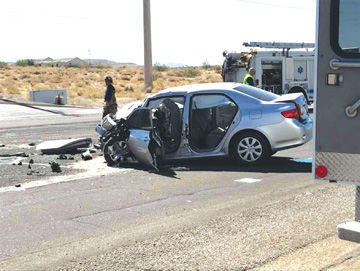 Bullhead City, Arizona—Eight people were hospitalized following an accident involving a passenger car and a tour bus.  The accident occurred on Friday, June 30th around 9:00 a.m. at the intersection of Bullhead Parkway and Laughlin View Drive.

A Van Hool tour bus was making a left turn onto Bullhead Parkway when it was struck by a southbound Toyota Corolla.  All five occupants in the Toyota were taken to hospitals in Las Vegas.  The unidentified male driver was transported by air to University Medical Center in Las Vegas.  His four passengers, one of whom is a 5-year-old child, were taken to Western Arizona Regional Medical Center, then later flown to a facility in Las Vegas.

The male bus driver and two of his passengers were taken to Western Arizona Regional Medical Center for treatment of unspecified injuries.  A Bullhead City Fire Department spokeswoman did not say how many people on the bus were injured, but she did state that 37 passengers declined treatment of possible injuries.

Speed has not been ruled out as a factor contributing to the accident.

We wish swift and full recoveries for all those who were injured in the accident.