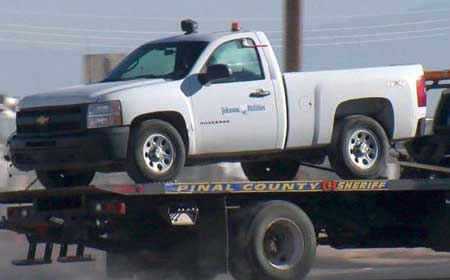 San Tan Valley, Arizona—DesRay Lara, age 25 of Florence, was killed on Thursday after being hit by a truck driven by an employee of Johnson Utilities.

According to the Pinal County Sheriff's Office, Marcigtan Winfrey Sr. of San Tan Valley turned himself in on Friday in connection with the deadly accident. He is being charged with leaving the scene of a fatal collision.

The accident occurred in the early morning near Johnson Ranch Boulevard and Thistle Trail. Although the collision occurred around 1:00 a.m., Ms. Lara's body was not found until 7:00 a.m. According to police, after hitting Ms. Lara, Winfrey fled the scene and sent a text message to a supervisor to advise that individual that he had damaged the work truck as a result of striking a barrier.

Ms. Lara had attended Florence High School where she was a cheerleader. She was pursuing a career in nursing.

We offer our condolences to Ms. Lara's family and friends over this senseless loss, made worse by Winfrey's callous disregard for human life.