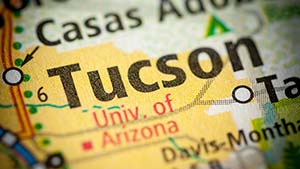 Tucson, Arizona—A driver speeding in a stolen car landed in jail after causing an accident that killed David Wampole and sent one other to the hospital on Wednesday evening.

Tucson Police Department accident investigators report that Haley Ohmsatte, age 16, was speeding north on Camino de la Tierra when she came upon a Toyota Camry that was also northbound. She attempted to pass the Camry in a no-passing zone, when she encountered an oncoming silver Mercedes.  Ohmsatte side-swiped the Mercedes then swerved back into her lane, where she struck the rear driver side of the Camry, causing it to spin out.

Despite these two collisions, Ohmsatte continued north until she rear-ended a Harley Davidson at Tres Nogales Road.  The impact sent the bike 75 yards further north.  Ohmsatte fled the scene.  Tucson Police later apprehended and arrested her on several charges.

The motorcyclist, identified as David M. Wampole, age 61, and a second person were transported to Banner University Medical Center.  Mr. Wampole succumbed to his injuries on May 19th.  The severity of injuries suffered by the second person involved is unknown.

Ohmsatte was booked into Pima County Jail on a $50,000 bond.  The Pima County Attorney’s office will likely add charges.

We extend our heartfelt sympathy to Mr. Wampole’s family and friends at this time of tragic loss for them, which is made worse by the recklessness of another.  We wish the injured person a swift and full recovery.