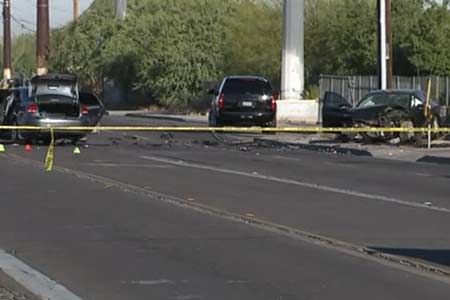 Phoenix, Arizona—A car accident early this morning claimed the life of Jessica Mendoza and resulted in undislosed injuries to eight other individuals. The crash occurred at the intersection of 7th Avenue and Baseline Road in Phoenix.

According to accident investigators with the Phoenix Police Department, the unidentified 21-year-old driver of a Volkswagen Passat failed to stop at an intersection, crossed into the westbound lanes of traffic and collided with a Chervrolet Impala. The Impala then struck a Chevrolet Tahoe.

Jessica Mendoza, age 21, was a passenger in the Volkswagen Passat and was rushed to the hospital in extremely critical condition. She died several hours after the accident.

Several other individuals were taken to the hospital with non-life-threatening injuries.

Police believe that impairment was a factor in the crash.

We offer our condolences to the family and friends of Jessica Mendoza and wish swift and full recoveries to those injured in this car accident.