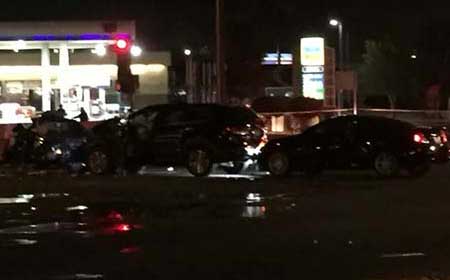 Phoenix, Arizona—Daisy Pacheco, age 24 of Phoenix, was killed and three others were seriously injured in a car accident on Sunday evening in west Phoenix.

The collision occurred near 51st Avenue and McDowell Road around 6:00 p.m. According to accident investigators with the Phoenix Police Department, a Volkswagen Jetta was westbound on McDowell Road and approaching 51st Avenue when the driver lost control of the vehicle and sideswiped another car. The Jetta spun around and was faced southbound when it was struck by a vehicle traveling eastbound on McDowell Road. That collision resulted in an impact with a fourth vehicle.

Ms. Pacheco was a passenger in the Jetta. She had to be extricated from the vehicle before being transported to a local hospital, where she died from her injuries. The three injured parties are in serious condition but are expected to recover. Additional people were treated and released at the scene of the car accident.

The car accident remains under investigation, although officers do not believe impairment on the part of the man driving the Jetta was a factor.

We offer our condolences to Ms. Pacheco's family and friends and wish speedy recoveries to the others injured in this car crash.