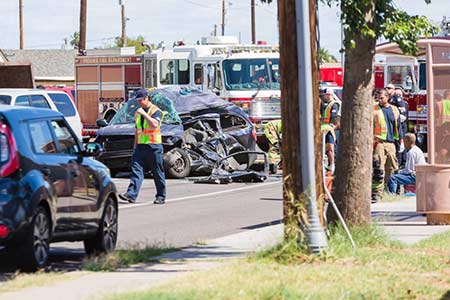 Phoenix, Arizona—Denise Cruz, age 25, was killed and her one-year-old daughter seriously injured in a three-vehicle car accident. The crash occurred this morning at around 9:00 a.m. on 19th Avenue near Buckeye Road in Phoenix.

According to accident investigators with the Phoenix Police Department, Ms. Cruz failed to stop at a stop sign and was hit by a dump truck. After this initial collision, the dump truck was hit by an SUV, causing the dump truck to roll and land on its side.

The SUV that collided with the dump truck then hit the vehicle driven by Ms. Cruz and occupied by her daughter. Ms. Cruz died from injuries sustained in the accident. Her daughter was taken to a local hospital in critical condition but is expected to survive her injuries. Four other people, including a three-year-old girl, sustained injuries in the crash.

We offer our condolences to Denise Cruz's family and friends and wish speedy and complete recoveries to those injuried in this accident.