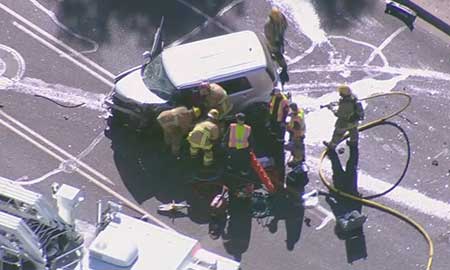 Phoenix, Arizona—Josephine Saldana, age 57, has been identified as one of the two victims who died in a car accident at the intersection of 67th Avenue and Thomas Road on Wednesday morning.

According to accident investigators with the Phoenix Police Department, two vehicles traveling in opposite directions on Thomas Road collided at 67th Avenue. Ms. Saldana was driving one of those vehicles. She was transported by ambulance to a hospital where she died from her injuries.

The driver of the second vehicle, identified only as a 34-year-old woman, suffered critical injuries and her passenger, a 43-year-old man, also died in the crash.

A third vehicle was involved in the collision and the driver and passenger both were taken to the hospital with serious but non-life-threatening injuries.

We extend our condolences to the family and friends of Ms. Saldana and the other person killed in this tragic crash. We also with speedy and complete recoveries to those injured in the car accident.