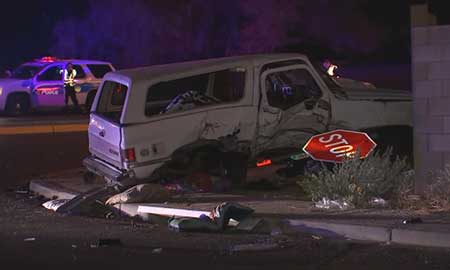 Phoenix, Arizona—Noah Perry, age 3, has been identified as the young boy killed in a car accident on Monday night.

According to accident investigators with the Phoenix Police Department, Noah was a passenger in an SUV driven by a 36-year-old man. A 33-year-old woman and a 6-year-old girl also were passengers in that vehicle.

The SUV was eastbound on Greenway Parkway and attempted a left turn onto 18th Street when it collided with a Honda that was traveling westbound. The Honda was driven by an unidentified 20-year-old male.

After the impact, both vehicles left the roadway and crashed into a block wall adjacent to a residence. Noah, the adult woman and 6-year-old girl were ejected.

The 6-year-old girl remains in extremely critical condition and the woman is in critical but stable condition. The two male drivers had non-life-threatening injuries.

The accident investigation is ongoing and officers have not ruled out impairment as a contributing factor.

We offer our condolences to Noah's family and friends and wish everybody involved complete and speedy recoveries.