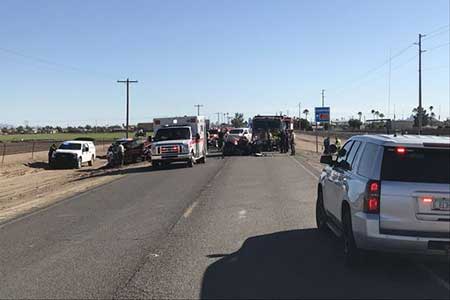 Arizona City, Arizona—Three people were killed in a head-on collision on Sunland Gin Road near Battaglia Drive on Monday afternoon.  According to Pinal County Sheriff’s Office accident investigators, Durrell Smith, age 26, was southbound on Sunland Gin Road when his sedan drifted across the center line and struck a Ford SUV head-on.

A front seat passenger in the SUV, Joyce McNeil, age 83, died at the scene, as did Mr. Smith.  The SUV’s driver, identified as James McNeil, age 83, was air evac'd to a hospital where he later died.

The accident is still under investigation.

We offer our condolences to the victims’s families and friends at this time of tragic loss for them.

A car accident on I-10 between Eloy and Picacho sent several people to the hospital on Thursday evening.

Accident on Highway 79 Claims One Life, Injures Another

A fatal crash on Highway 79 north of Florence resulted in the Arizona Department of Transportation closing Highway 79 in both directions between Arizona Farms Road and Highway 60 for several hours on Friday shortly after noon.

Cooper Lamb, the son of Pinal County Sheriff Mark Lamb, is suspected of striking and injuring a bicyclist while driving impaired.