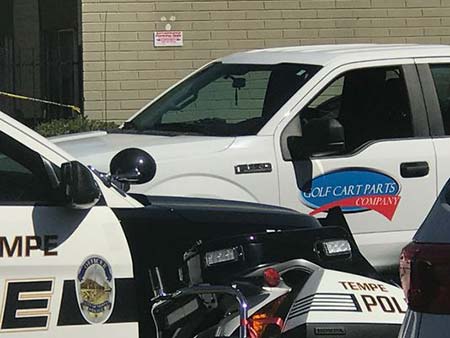 Tempe, Arizona—A toddler is clinging to life after being hit by a truck in the parking lot of an apartment complex.  The accident occurred around 2:00 p.m. on Monday afternoon outside an apartment complex at 950 S. Terrace Road in Tempe as a father was unloading his children from his car.

The father took his 3-year-old daughter out of the car first.  As he turned to retrieve a second child, the 3-year-old started walking away from the car when she was struck by a truck in the parking lot. The girl was transported to a nearby hospital in extremely critical condition.

The truck was from Golf Cart Parts Co. of Gilbert and apparently was delivering a golf cart to a resident in the complex.  Police believe the driver may have been impaired.  He was arrested and led away in handcuffs.

We offer wishes for the young girl’s swift and full recovery from her injuries.

Tempe resident Julia Hunt died when her car was struck head-on by a wrong-way driver on a New York highway early Thursday morning.

A suspected drunk driver struck and killed a 77-year-old female pedestrian as she crossed Mill Avenue on Thursday night.

The Arizona Department of Public Safety is asking for the public's help in finding a driver who struck and killed a motorcycle on US-60 on Monday.