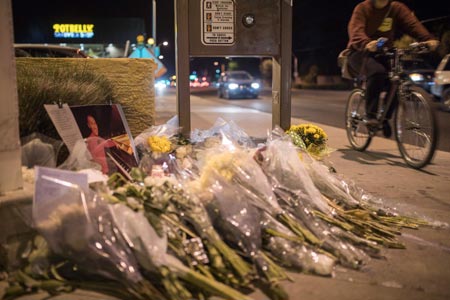 Tempe, Arizona—Xiaoying Wen, a doctoral student in music at Arizona State University, was killed while riding his bicycle near campus last Thursday.  Tempe Police accident investigators report that Mr. Wen was in the crosswalk at Rural Road and Vista Del Cerro Drive when he was struck by a pickup truck.

According to Tempe Police, the pickup had a green light.  Wen’s friends say the light at that intersection is timed so that both directions momentarily have a green light.  They have posted a video demonstrating their claim.

Dr. Meir said he and another student kept vigil at the hospital and were there when Wen died later that night.

Mr. Wen’s family is traveling to Arizona from China.

We extend our condolences to Mr. Wen’s family and friends over this tragic loss.

One car rear-ended another that was stopped at a traffic light, sending the first into a crosswalk, where it struck two young children.

A toddler is clinging to life after being hit by a truck in the parking lot of an apartment complex in Tempe.

Elaine Herzberg has been identified by the Tempe Police Department as the victim in the crash that occurred last night involving an Uber self-driving vehicle.