Sean is an attorney at O'Steen & Harrison, PLC. He joined the firm in 2020 and practices in the areas of personal injury, car accidents, truck accidents, motorcycle accidents, dog bites and injuries on property.

He graduated from Loyola University Chicago in 2010 (B.A., Spanish and Anthropology) and Southern Illinois University School of Law. Sean is admitted to practice in the Supreme Court of Arizona and also in the United States District Court (District of Arizona).

Sean grew up in rural Southern Illinois and comes from a legal background, which is reflected in his work ethic. Sean has lived in South America, where he became fluent in Spanish and uses his language abilities to help both English and Spanish speakers throughout Arizona.

When he is not working, Sean enjoys spending time with family and friends, being outdoors, playing golf, the guitar and cooking.

Sean is committed to giving each client the best possible legal representation. 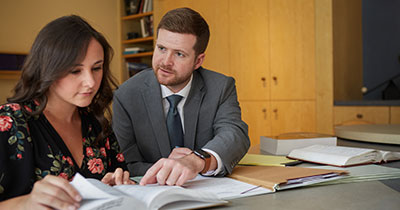