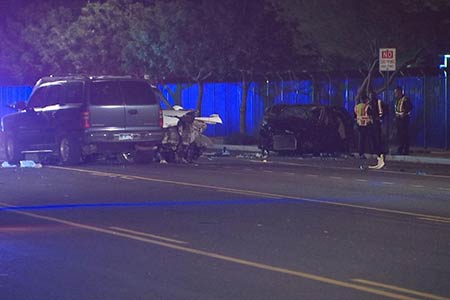 Phoenix, Arizona—Two women are dead and five others, including an infant, were injured following a car accident in which a vehicle crossed the median in west Phoenix on Sunday evening.

The first car, driven by Bianca Aguirre, age 18, crossed the center line for unknown reasons.  Her car struck another vehicle occupied by Cherish Lewis, age 34, a 32-year-old man and an 11-month-old infant.  Ms. Lewis died at the scene.  The man and infant suffered non-life-threatening injuries.

Ms. Aguirre’s car then collided with a third vehicle carrying a 17-year-old girl and a 61-year-old woman.  They, too, suffered non-life-threatening injuries.

The police investigation is ongoing.

We extend our condolences to the victims’ families and friends over this tragic loss.  We wish complete and swift recoveries for those who were injured.