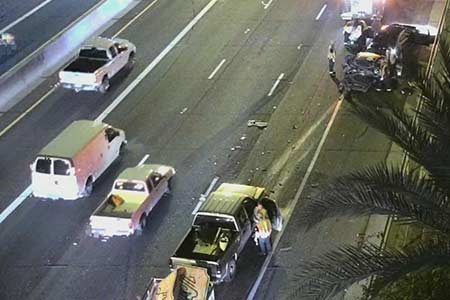 Jennifer Vegtel Killed in Car Accident on SR-51 in Phoenix

Phoenix, Arizona—Jennifer Vegtel, age 31, and her 5-year-old son, Logan, were killed in a car accident during the Monday evening rush hour traffic on SR-51.  Arizona Department of Public Safety reports that a pickup truck driven by Edgar Ramos-Esteban, age 34, was southbound on SR-51 at Highland Avenue when it smashed into the rear of a vehicle driven by Ms. Vegtel.

The collision started a chain reaction that ultimately involved four vehicles. Following the initial impact, the Kia collided with the back of a 2015 Volkswagen sedan.  The driver was identified only as a 48-year-old man.  The Volkswagen, in turn, struck a 2018 Isuzu truck driven by an as-yet unidentified 49-year-old man.

Mr. Ramos was cited and the investigation continues.  The driver of the Volkswagen was transported to a nearby hospital for treatment of his unspecified injuries.

Logan was a kindergartner at Redfield Elementary School in Scottsdale.

Our sympathies are with the Vegtel family and friends as they mourn the loss of Jennifer and Logan.